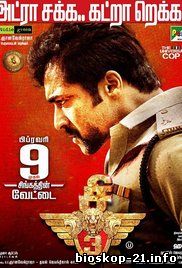 The film starts with tremble in Andhra Pradesh parliament where long pending murder case of city commissioner Ramakrishna (Jayaprakash) is being discussed where home minister K. Sathyanarayana (Sarath Babu) proposes to bring DCP Durai Singam (Suriya) from Tamil Nadu police to solve the long pending case. Initially being attacked by Madhusudhana Reddy's (Sharat Saxena) men at railway station at arrival Durai Singam bashes them out and joins the Visakhapatnam police force under CBI pretending to be casual and not serious about the murder case Durai Singam secretly investigates the case from all aspects. Mean, while Durai Singam is being followed by Vidhya (Shruti Haasan) whom is a journalist from Andhra Pradesh tracking Durai Singam in disguise as student applied for IPS exams. Durai Singam initially says divorced his wife Kavya (Anushka Shetty), but secretly contacts her. Later, after suspicion of Subba Rao (Robo Shankar) it is told to be play to avoid Kavya from attacks from suspects of murder case. But, finally finding Reddy is behind the murder in series of investigation decides to wipe out goondas in Vispakhapatnam along with arresting Police officers involved in murder of commissioner. After, tracking a suspect he come across to know illegal dumping of Bio-waste and E-Waste from Australia by Vittal Prasad (Thakur Anoop Singh) a wealthy businessman from Australia and son of central minister Ram Prasad (Suman) who works as master mind behind dumping of wastes from Australia for his business benefits in Vishakapatnam by help of Reddy and his staff Rajeev Krishna (Kamalesh).